In 2005, The Honorable David J. Berger, Mayor of the City of Lima, Ohio convened a group of concerned citizens to discuss developing the City of Lima into a prime location for high-tech research and development. The Mayor felt our strategic location within 300 miles of twelve major research universities gave us a very competitive advantage. 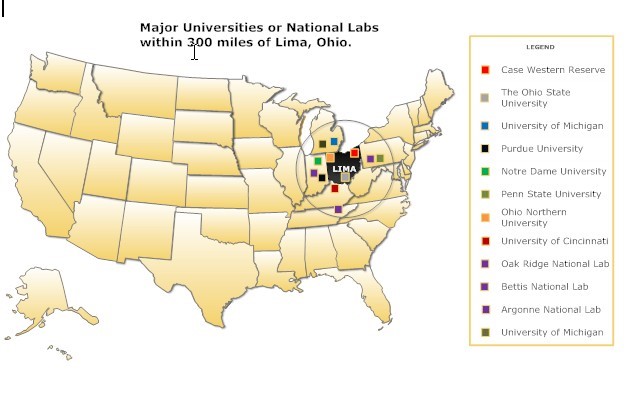 The Mayor also based his idea on an article entitled, Where the Good and Bad Jobs Will be 10 Years from Now. In the article, the author, Richard Florida, talks about the trends in job growth in three broad occupational classes – the creative class, service class and working class. The creative class includes the high-paying, knowledge-based jobs in science and technology and business management. Mr. Florida states that his analysis comes from the Bureau of Labor Statistics’ latest ten-year projections, which provide a broad picture of what America’s workers will be doing in the future. Allen County, Ohio, is one of just a small number of counties in and the surrounding states that are predicted to have the largest growth (14% – 16.4%) of creative class jobs between 2012 and 2020.

As a result of Mayor’s vision, the Ohio Energy and Advanced Manufacturing Center, Inc. (OEAMC) was born. The group met as a committee of volunteers for several years until the Mayor instructed his Law Director to file for incorporation on behalf of the committee.

Below is a chronological list of our most significant activities and accomplishments over the past ten years.

In late 2005, members of the Mayor’s newly formed R&D committee traveled to New York City and met with Rick McGahey and others of the Ford Foundation. We requested the meeting to share our ideas and to garner feedback and advice from the Ford Foundation that would help us accomplish our goal to develop Lima into a location for high tech research and development. The Ford Foundation team made several excellent suggestions and over the ensuing years all of them have been implemented.

The first significant high-tech R&D project we partnered on was the development of an Advanced Materials Commercialization Center (AMCC). The collaborators in the grant received $1.35 million in funding from the Ohio Department of Development through its Third Frontier Wright Projects program to conduct the research within the walls of a local manufacturing plant.

We were simultaneously helping the City of Lima acquire and remediate the “Lima Loco Works”, a 64-acre industrial site in Lima, and create a Research and Development Technology Park on property adjacent to that site. The State of Ohio assisted in both of these endeavors with funding from the H.B. 442 Program and the Job Ready Site Program.
2006 & 2007

In 2006, we implemented the first recommendation of the Ford Foundation which was expanding our outreach activities in the hopes of bring additional partners into the fold. By 2007, the Mayor’s “R&D committee” included the Director of R&D for American Trim, the Dean of Engineering of Ohio Northern University, the Plant Manager of the local General Dynamics Plant, the Operations Manager of the Husky Lima Refinery, the President of American Electric Power (AEP-Ohio) in Columbus, Ford’s Executive Director of Global Manufacturing in Dearborn, Michigan and a former Ohio Governor’s Regional Economic Development Director.

In 2008, we partnered with a for-profit manufacturing company and the Ohio Northern University on a grant application to create a $3 million Materials Deposition Center (MDC) which utilizes additive 3-D printing technology to turns physical design into made-on-demand products.

Also, in 2008, we implemented another recommendation of the Ford Foundation team which was to officially incorporate as a non-profit corporation.

In 2010, Ohio Development Services Agency (ODSA) Director, Christiane Schmenk, visited Lima to tour our new Energy Efficient Selective Protective Mask Line Project, which was made possible by a million dollar ARRA grant. She was impressed with the number of R&D projects the OEAMC had accomplished to date and helped us secure a grant to assist us in continuing and expanding our work.

By 2010, we had been in existence for five years and we recognized that in order to ensure our continued growth we needed to implement the two more steps recommended by the Ford Foundation, which were; 1) hire a full time CEO, and 2) construct our own technology center. Until this time all the research projects we collaborated on were being housed within the facilities of our for-profit partners.

In 2011, Judith Cowan resigned from the OEAMC Board of Directors and became the organization’s first full time President and CEO. We also felt this was a good time to bring all our board members, our new President and our legal advisor together for a comprehensive off-site Strategic Planning exercise. We held our workshop at the Aileron Center for Business in Dayton, Ohio, which was built by Clay Mathile, former owner of the IAMS Pet Food Company. The workshop was conducted by Darcy Bien, a Harvard School of Business graduate who works on behalf of Aileron. We walked away from the workshop with a strategic road map for our future.

In 2012, we were awarded a $1.4 million grant from the United States Department of Commerce, Economic Development Administration (EDA) to construct a new 20,000 square foot Research Center in Lima, Ohio. We matched the grant funds with a loan from the Ohio Research and Development Loan Program and the result is a beautiful new facility located in the Lima Technology Park.

In 2013, we expanded our outreach by traveling to the Oak Ridge National Laboratory (ORNL) in Oak Ridge, Tennessee for an introductory meeting with members of their Manufacturing Division. Since that initial meeting, the Oak Ridge team has visited Lima several times and we now enjoy a strong working relationship with them. They have collaborated on two of our technology project grant applications.
We have also hosted representatives from the Pacific Northwest National Laboratory (PNNL) located in the State of Washington and they were a partner on our federal proposal for the development of a new High Velocity Metal Forming (HVMF) Research Commercialization Center.

In 2014, representatives of the OEAMC held a strategy meeting with the engineering team at the Husky Lima Refinery. The goal of the meeting was to identify potential joint research projects that would benefit not only the Lima Refinery, but all seven chemical companies located on the large Lima Petrochemical Campus. The OEAMC has since been awarded over $200,000 in federal grant funds to conduct a feasibility study for the potential creation of a liquids and metals analysis laboratory / R&D Center in Lima, Ohio.

In 2015, the OEAMC was awarded $1.2 million in two federal grants to support our High Velocity Metal Forming (HVMF) Commercialization Center activities. In July of 2015, we hired a Technical Director for the new HVMF Commercialization Center. He immediately began purchasing the specialized custom-made equipment required for the center and conducting outreach activities to potential collaborators in a multi-state region.

2016
In the ten years since the Mayor convened his initial technology development committee in 2005, the OEAMC has led or collaborated on over $27.5 million in funded projects and we have $1.4 million in grants funds in the pipeline. We have been recognized as the primary regional R&D Center by regional for-profit companies, National Laboratories, federal agencies and our federal legislators.